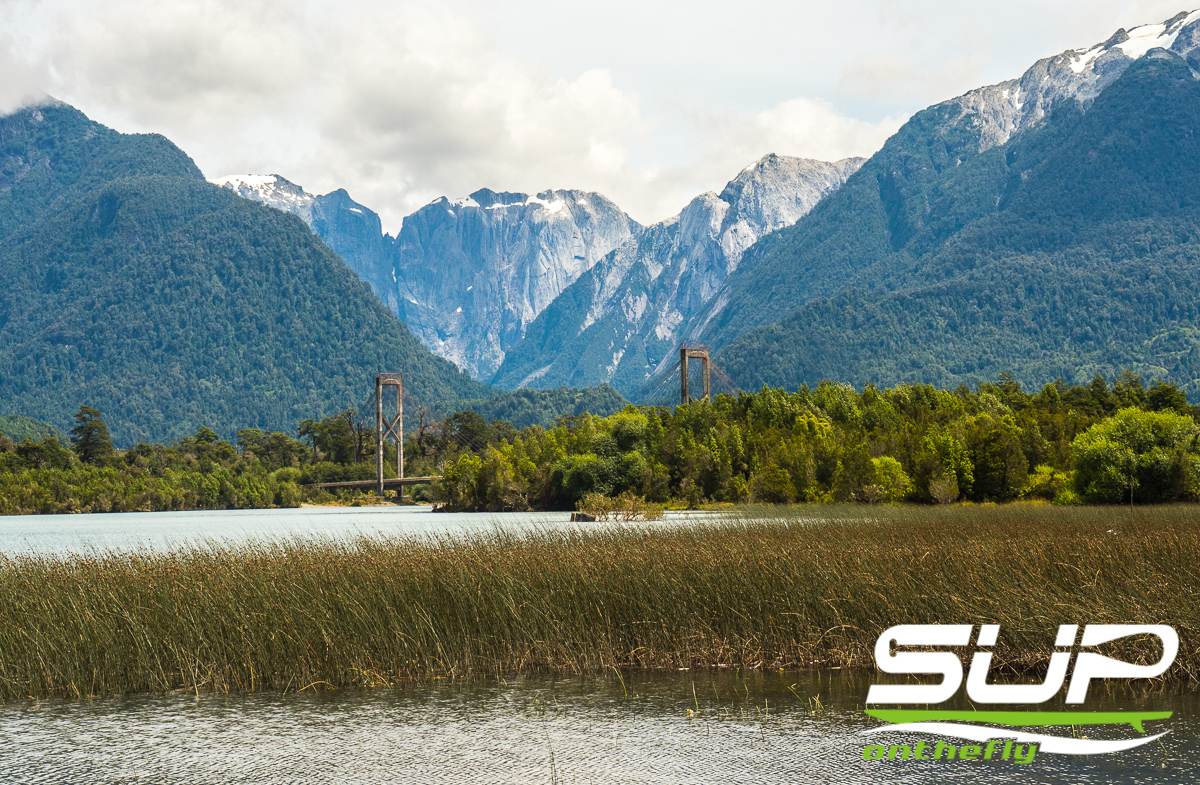 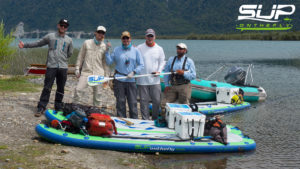 John’s desire to paddle and fish this remote region of Chile was born decades ago during his first trip to Chile as a ski racer. Since then, he had the opportunity to travel extensively in Latin America and had several adventures in places such Torres del Paines, a successful summit of Aconcagua, and even spent a year living in Santiago. But until this year, the dream to paddle and SUP fish in Patagonia had eluded him. 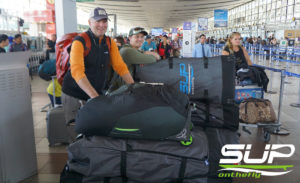 Nick, Damon and John spent the past year fishing from SUPs out of their home base in Ellicottville, NY and in Mexico during a trip to fish the salt water flats of the Yucatan. They realized quickly that the portability of SUPs made them a great vessel for accessing new water. The more they paddled, explored and fished, the more passionate they became about the way SUP boards provide a way to fish local waterways that don’t have boat ramps or access points for their other watercraft.

Inflatable stand up paddle boards (SUPs) are revolutionizing the way we access the water. Inflatable SUPs don’t require a full-blown boat launch, or even a road. The SUPonthefly team had the chance to fully experience the wonders of remote access fly fishing destinations during their amazing trip to the Patagonia region of Chile.

Their trip began with 36 hours in transit from Ellicottville, NY to Puerto Montt, Chile, which included numerous vehicles and several flights – all without excess baggage fees.  In Puerto Montt, the group was met by SUPonthefly brand ambassador, Coké Fernandez Haverbeck, who drove them to his home town of Puerto Varas. 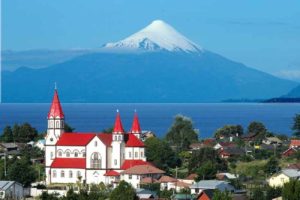 Puerto Varas, also known as “La ciudad de las rosas” or “the city of roses”, is a beautiful town located in the Los Lagos Region of southern Chile. In addition to fabulous scenery, the city owes much of its charm to German architecture and traditions. Puerto Varas is a popular tourist destination for both Chileans and international visitors.

The SUPonthefly team stocked up on provisions in Puerto Varas and drove 76 km east to Lake Todos Los Santos, which located in Vicente Pérez Rosales National Park beneath the foothills of the Andes Mountains. 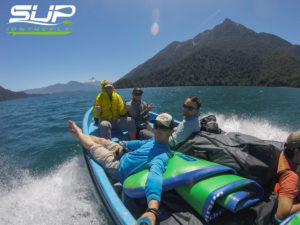 Todos Los Santos (translated as “All Saints Lake”) was part of an early water route through the Andes to Argentina. It was used by Jesuit and Franciscan monks as early as the 1600’s, which is how the lake got its name.

Upon arrival at Lake Todos Los Santos, the SUPonthefly group hired a boat to make the hour long trip to their campsite, which was dominated by a view of Osorno, an imposing 8,700 ft. high volcano overlooking the western flank of the lake. 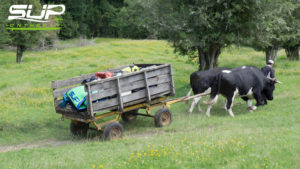 Inflatable SUPs can be transported to regions totally inaccessible to guide boats.

After spending the night on the shores of Lake Todos Los Santos, the SUPonthefly team hired a team of bulls with a cart named “Coloso” to haul gear while they hiked three miles to an undisclosed mountain lake. (Sorry folks. Fly fisherman are cagey when it comes to their favorite fishing destinations!) 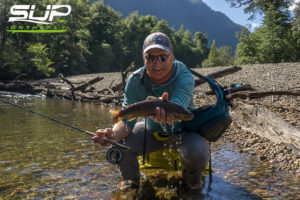 The crew paddled across the lake to a remote campsite which would serve as their base for three days as they paddled, fished and explored dozens of miles of streams that fed the mountain lake. 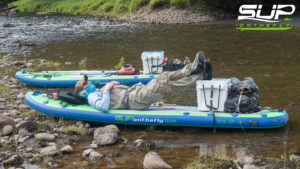 Boards were frequently used for napping!

The SUPonthefly team was well equipped with gear from Adventure Bound onthefly, which they new they could count on when being 6000 miles from home. Their equipment list included gear from Orvis, Osprey, Bison coolers, Patagonia, Good to go, Helle knives, Point 6, Grayl filters and Princeton Tec which all performed flawlessly during long days on rivers, lakes and at camp.

The boys worked up a good appetite 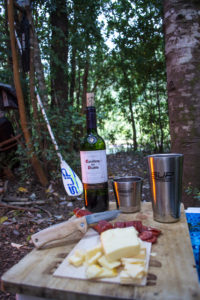 After three unforgettable nights camped in the wilderness, the team made its way back across the lake and rendezvoused with the bull team to make the trek back to Lake Todos Los Santos and Puerto Varas.

Chaitén as seen from a commercial flight in 2008 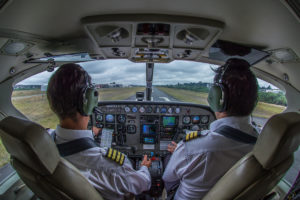 Following hot showers and a night sleeping in beds instead of tents, the SUPonthefly group hopped a Cessna to the town of Chaitén, which sits beneath the infamous Chaitén volcano. In 2008, the Chaitén volcano erupted for the first time in 9,500 years, sending plumes of ash as high as 98,000 ft in the air. It deposited a layer of ash over the town of Chaitén, which had a population of 4,200 people prior to evacuation. The town was buried in a layer of ash, water supplies were contaminated and the course of the Chaitén River was permanently altered. The town of Chaitén is slowly recovering, but still has less than 75% of the population it had prior to the volcano’s eruption. 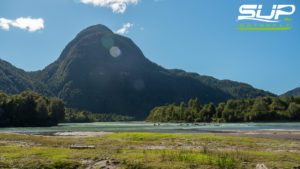 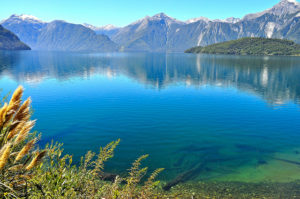 In Chaitén, the SUPonthefly team was joined by local Chilean fly fishing guide, Nestor Fabian Beltran Sanzana, before departing to Yelcho Lake. At its northwest corner, Yelcho Lake flows into the Yelcho River. The group paddled into headwaters of the River Yelcho and spent three days making the first descent of the River Yelcho on SUPs. They were surrounded by spectacular scenery at every turn 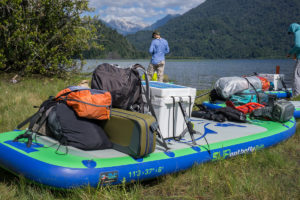 and fished rivers that abounded with native trout. During this part of the trip, the team was especially thankful for the durability of the SUPonthefly Guides. It’s one thing develop a leak when you are an hour or two from civilization. It’s quite another matter entirely when you are 45 km from the nearest road!

Another factor that made the SUPonthefly Guide the perfect board for the excursion was its superior weight to cargo / carrying capacity ratio. Fully packed, the board is under 50 lbs,, meeting airline weight requirements. The board itself weighs 36 lbs., so it’s not considered a lightweight board. But an advanced paddler can carry a whopping 600 lbs. of gear on the SUPonthefly Guide, making it the best board in the industry from the standpoint of weight to cargo capacity. Osprey packs were also a huge part of gear hauling. The team had the opportunity to use some 2017 Osprey Transporter duffels that looked like new at the end of two weeks of incredibly heavy use and abuse. 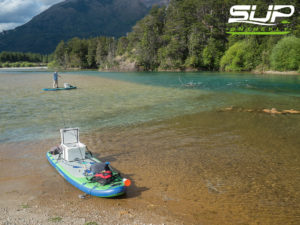 The trip wrapped up on rivers near Nestor’s home town of Futaleufú, located on the Chilean / Argentinian border. The crew added another river to the list of first descents on a SUP – the Espolon River. With its class two and three rapids, and warm turquoise waters, the Espolon won the hearts of our adventurous crew.

Their last stop was the Futaleufú River, which is heralded as one of the premiere whitewater rivers in the world. In addition to partaking in world-class fishing, the SUPonthefly team made the first descent of the “Limit” section of the Futaleufú on SUPs. They had so much fun, they went back and did it again the next day! 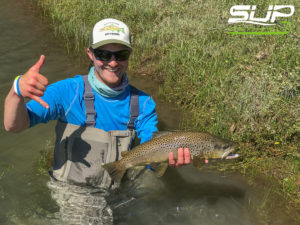 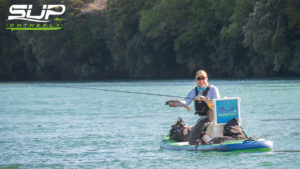 “The packability of the inflatable SUPonthefly Guide is whole reason we were able to do this,” says Rounds. “We were able to pack all our gear, including Bison coolers for each board, without an overweight baggage charge. I can’t think of any other way you can get a boat on an airplane!”

Since inflatable SUPonthefly boards include durable wheeled duffles with backpack straps, the boards are easily transported virtually anywhere you can find a path to a river. This makes them ideal for  traveling to intentional fishing destinations where boat ramp access can be limited or non-existent. 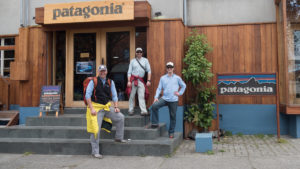 As the guys sift through hundreds of pictures and dozens of hours of drone and video content for upcoming “Explore New Waters: SUP Fly Fishing” presentations and a possible submission to the Fly Fishing Film Festival, they talk about their next fly fishing destination. Will it be Alphonse Island in The Seychelles? Denali National Park in Alaska? The Kamchatka Peninsula in Russia? Bungsamran Lake in Thailand?  Every destination in the world is within reach when your boat fits in a Cessna!