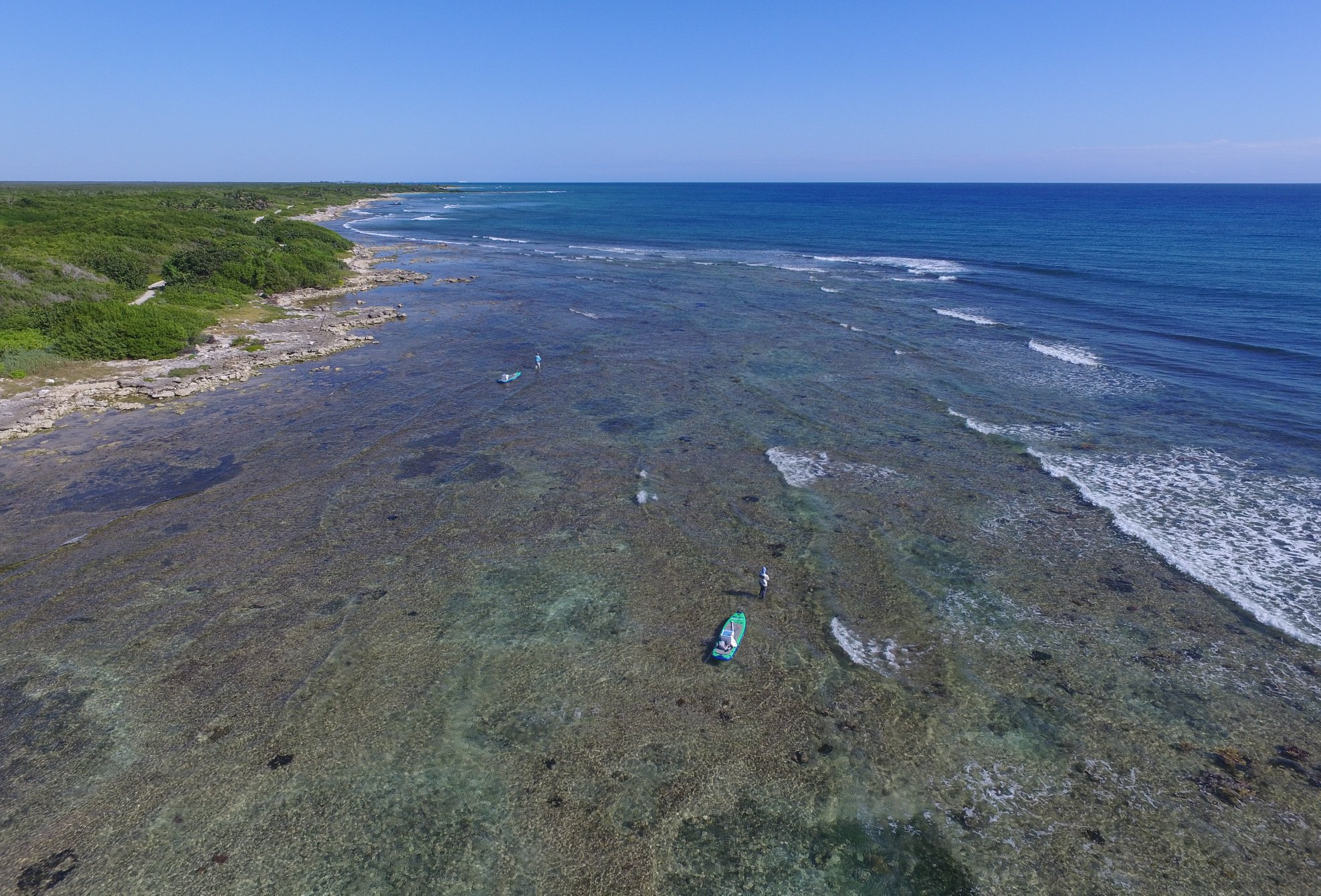 The plan was simple. In retrospect, it was deceptively simple. But then again, the threat of a tsunami can ruin the best-conceived plans, especially when those plans include staying on a stilted platform in the middle of the ocean… But we’re getting ahead of ourselves.

The PLAN was to “get the band back together”. The “band” included a group of fly fishing junkies who were looking for an opportunity to anniversary last year’s fly fishing SUP (stand up paddle board) trip to Patagonia. Band members include John Rounds, founder of Adventure Bound, Damon Newpher & Nick Sagnibene, fly fishing guides for Adventure Bound, and Coké Fernandez Haverbeck, SUP onthefly brand ambassador / drone operator.

A delayed flight, missed connection and rental car snafu resulted in the team starting their adventure with a five hour drive south from Cancun on deserted paths weaving through the Yucatan jungle… in the dark. The crew arrived safely in Mahahual and spent two days fishing and packing in preparation for the trip to the atoll reef of Banco Chinchorro with the guidance of Nick Denbow and Amigosdelmar

In addition to providing the opportunity to fish a variety of species such as and Tarpon, Juvenile Tarpon, Bonefish, Permit, Trigger fish, Snook, and Jack Crevalle, the incredibly picturesque Mahahual coastline was perfectly suited for fly fishing from a SUP. Shallow shoals are virtually inaccessible by any other water craft. When sections were too shallow to paddle, the team towed the SUPs loaded with gear to sites that rarely see anglers.

The night before the group was to depart for their ultimate destination, the Banco Chinchorro atoll, the team was excited to be one of the first non-Mexican anglers to ever fish the atoll.  Until recently, the Mexican government only allowed ancestoral Mexican fishermen to access these waters.

The remoteness of the location also made it great for gear testing product lines carried at Adventure Bound, like Patagonia, Osprey luggage, Orvis rods & reels, Bison coolers, and of course, SUP onthefly stand up paddle boards.

After a great evening dinner and possibly a sip or two of Mexican beer, the crew slept soundly… and missed a barrage of frantic texts warning them that the Mexican government had issued the tsunami warning after a 7.6 magnitude earthquake shook Barra Patuca off the northern coast of Honduras at 9:51pm on Tuesday, January 9th.

Nick actually woke up in the night and thought he felt the walls shaking. But he promptly ignored it and went back to sleep. 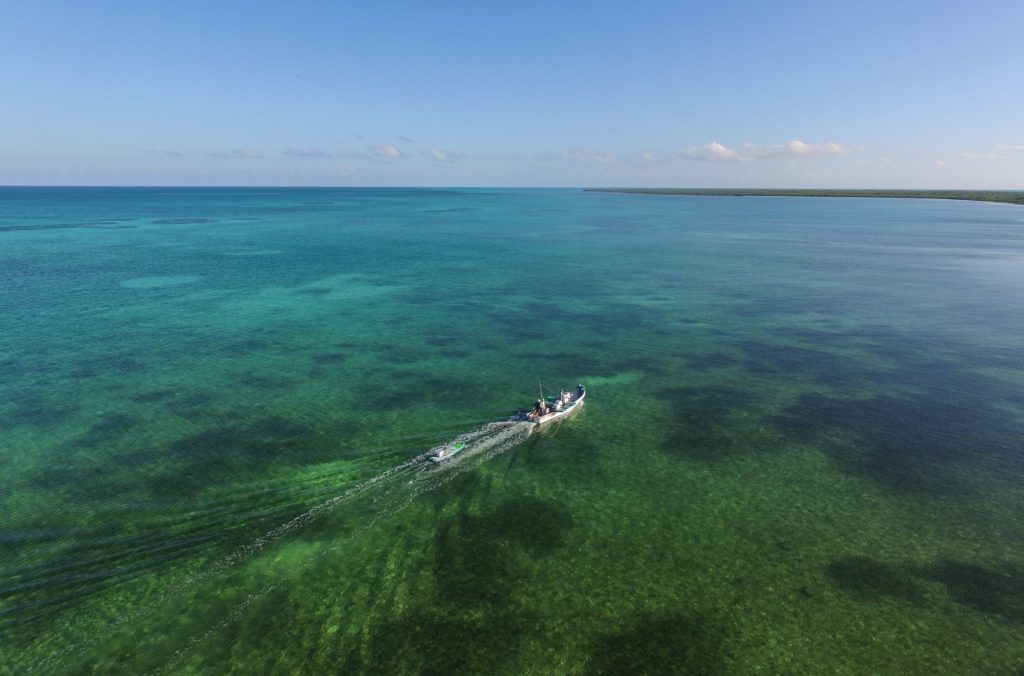 Though the team wasn’t wiped off the face of the earth by a tsunami in the night, the Mexican federales wouldn’t allow them to head to the Banco Chinchorro atoll until mid-day the next day. When they were finally cleared for release, the team was met by an ancient mariner who would ferry their boards and gear to a hut on stilts which resembled the type of structure they’d made with popsicle sticks as kids. 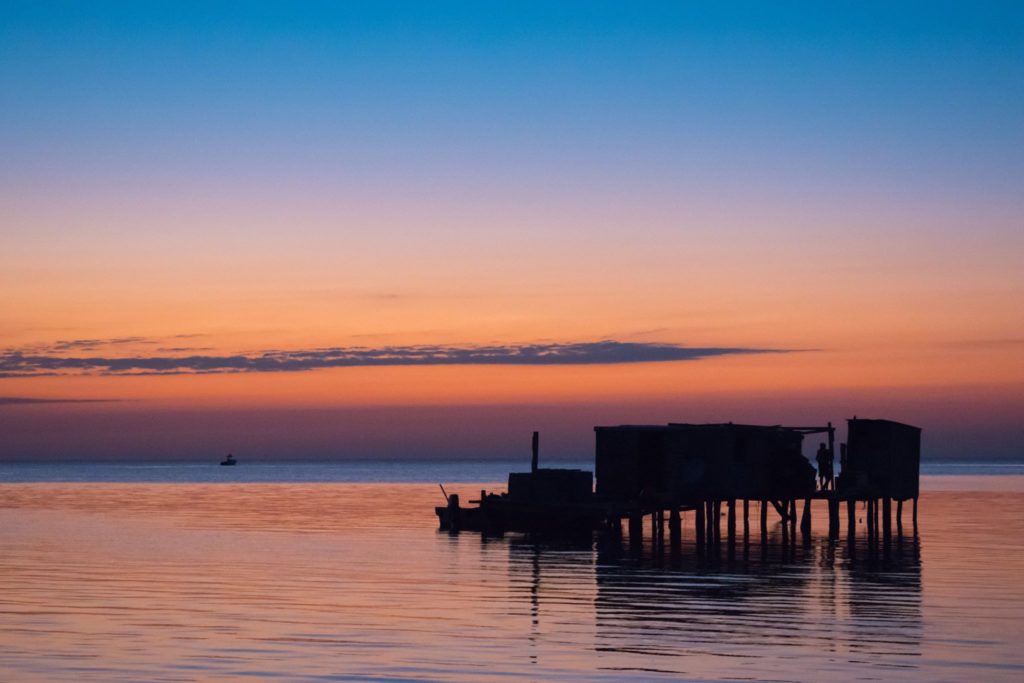 Their hut was meant to hold four people. But the threat of the tsunami caused the adjacent hut’s owner to flee to the mainland, taking its keys with him. And so the Adventure Bound hut grew to a merry band of 13, including the fly fishing team, guides, and a displaced dive crew. 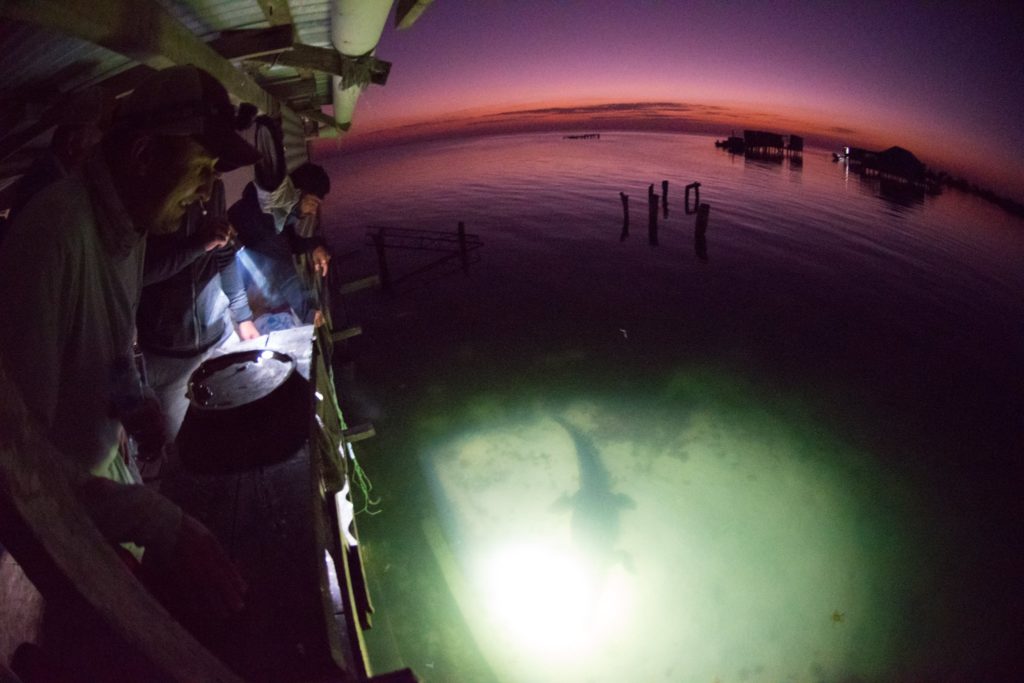 As it turns out, huts are home not only to human occupants. The main living area is shared with cockroaches and spiders. The water beneath the huts are inhabited by crocodiles who beg for scraps like ill-mannered dogs. 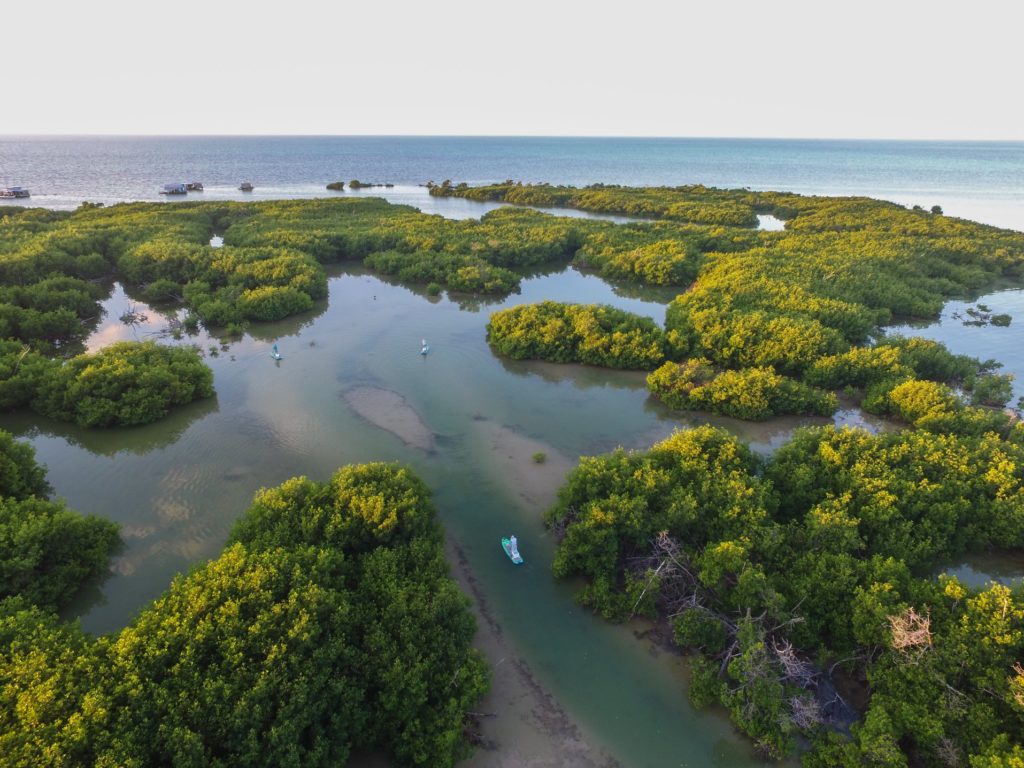 All manner of discomfort is considered well worth the trade for the glorious experience of fishing for an abundant supply of Triggers and Tarpon amid thatches of mangrove in these virgin waters of Banco Chinchorro.