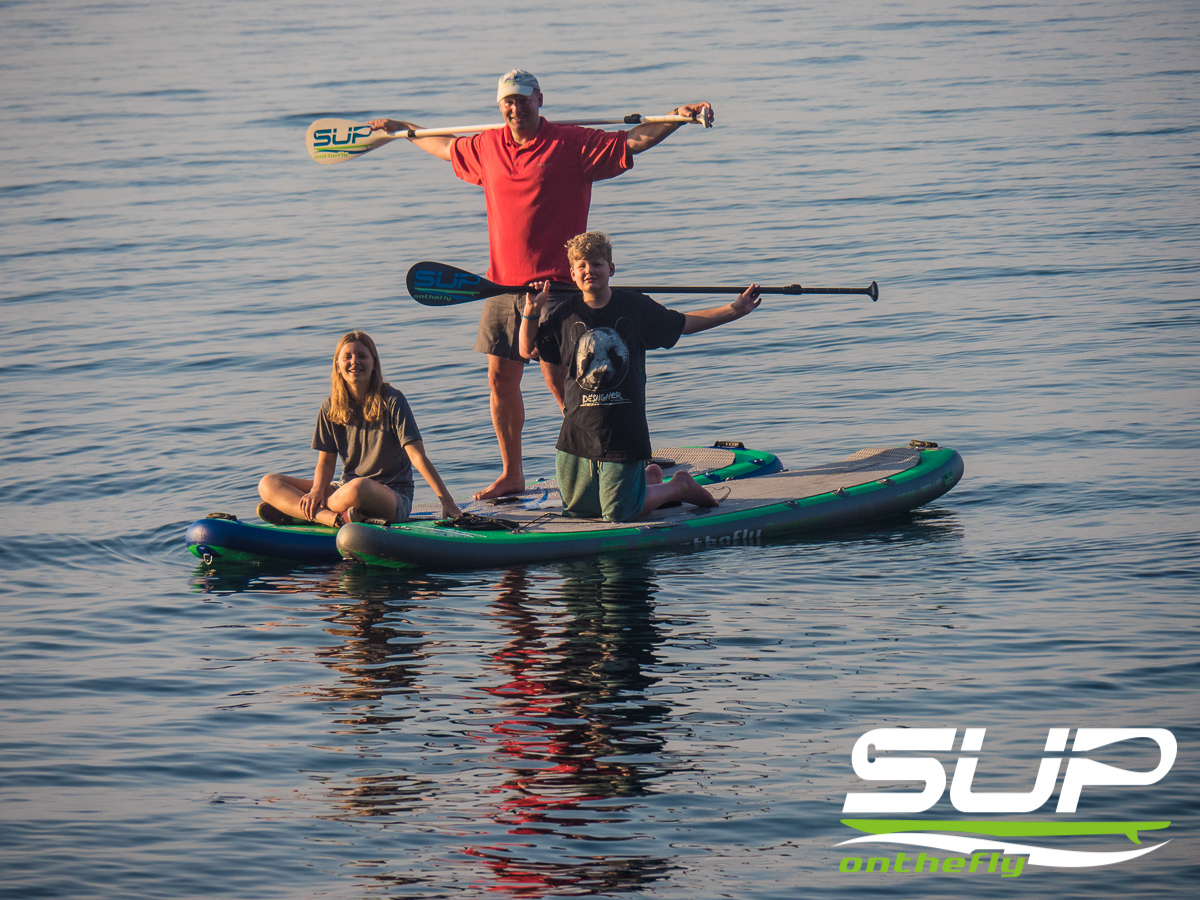 Every place on this planet has something unique to offer. A traveler’s work is to find that special “something”. Every once in a while, you discover an area that isn’t simply special or unique… it’s truly magical. Lake Atitlan in Guatemala is one such place. Following in the footsteps of indigenous Mayan civilizations, European colonialists, hippies and new agers, the Rounds family (owners of Adventure Bound) found their way to the shores of the enchanted lake that author Aldous Huxley compares to Lake Como in Italy.

Lake Atitlan is a virtually undiscovered treasure for the mainstream international traveler. Part of the reason for this is its geographic isolation. The drive to Panajachel, which is the main access point for Lake Atitlan, is a 2 1/2 – 3 hours from Guatemala City or Antigua. While most of the drive is comfortable, the last 1/2 hour from the mountains to the lakeshore in Panajachel involves steep mountain switchbacks with twisting hairpin turns. Lake Atitlan is quite large with five major communities and several small communities along its shores. 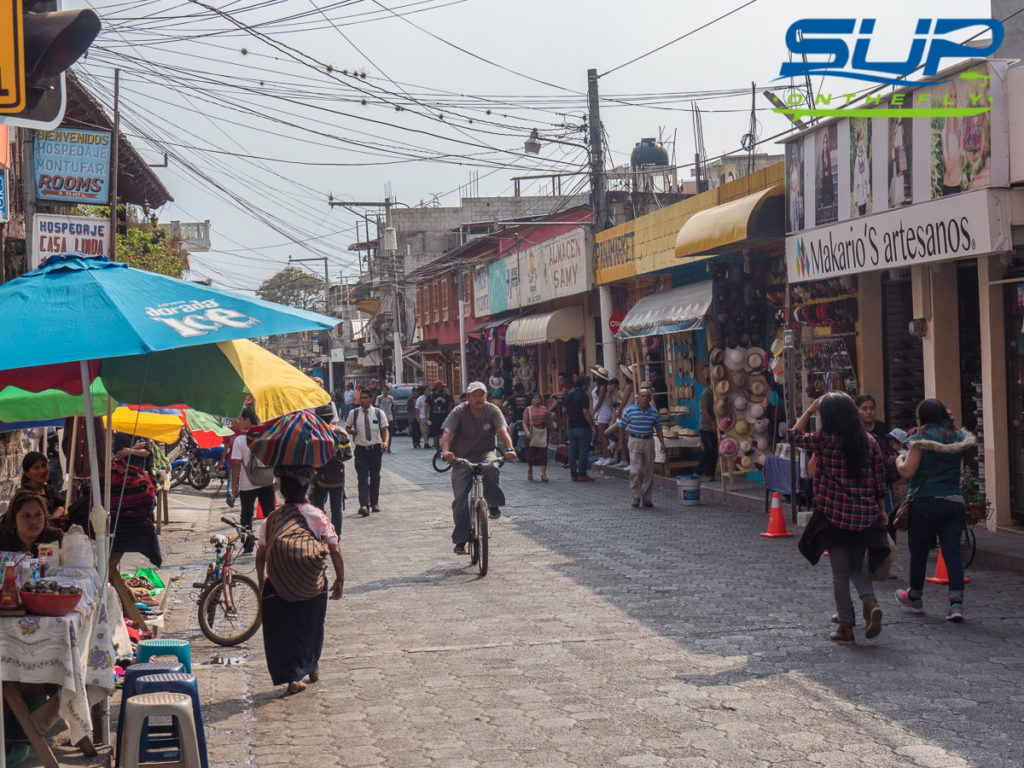 Panajachel (or Pana) is the launching point for most tourists since the other communities are difficult or impossible to reach by road. Be sure to stock up on food and quetzals (Guatemalan currency) in Pana because selection is limited in the other lake communities, and most businesses don’t accept credit cards. Don’t expect to find a supermarket! The stores in Pana carry mostly dry goods. You can sometimes find a small refrigerator with a few select items like cheese or yogurt. Milk and juice are usually unrefrigerated in boxes. Frozen foods are virtually non-existent because most Guatemalans don’t have freezers. But you will find a plentiful supply of fresh produce year-round at the many open-air markets throughout the region. 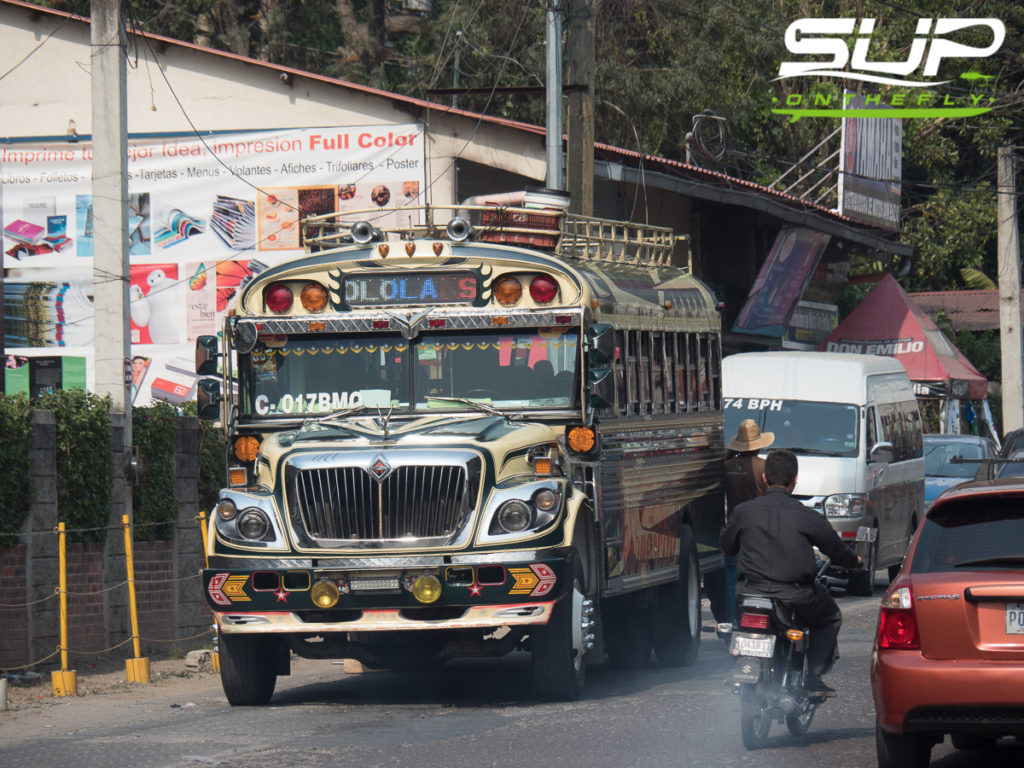 Though Panajachel has a touristy district, Calle Santander, it is also home to a large indigenous population. So along with your typical bright-colored Guatemalan blankets, jewelry, pottery, dresses and artwork, you will see large pens with live baby chicks, colorful yarn and beads, handmade furniture and vibrantly painted “Chicken Buses” that take people to markets and towns throughout the region.

Panajachel is on the east end of the lake. The four major communities on the western side of the lake are Santiago Atitlan, San Pedro La Laguna, San Juan la Laguna and San Marcos la Laguna. 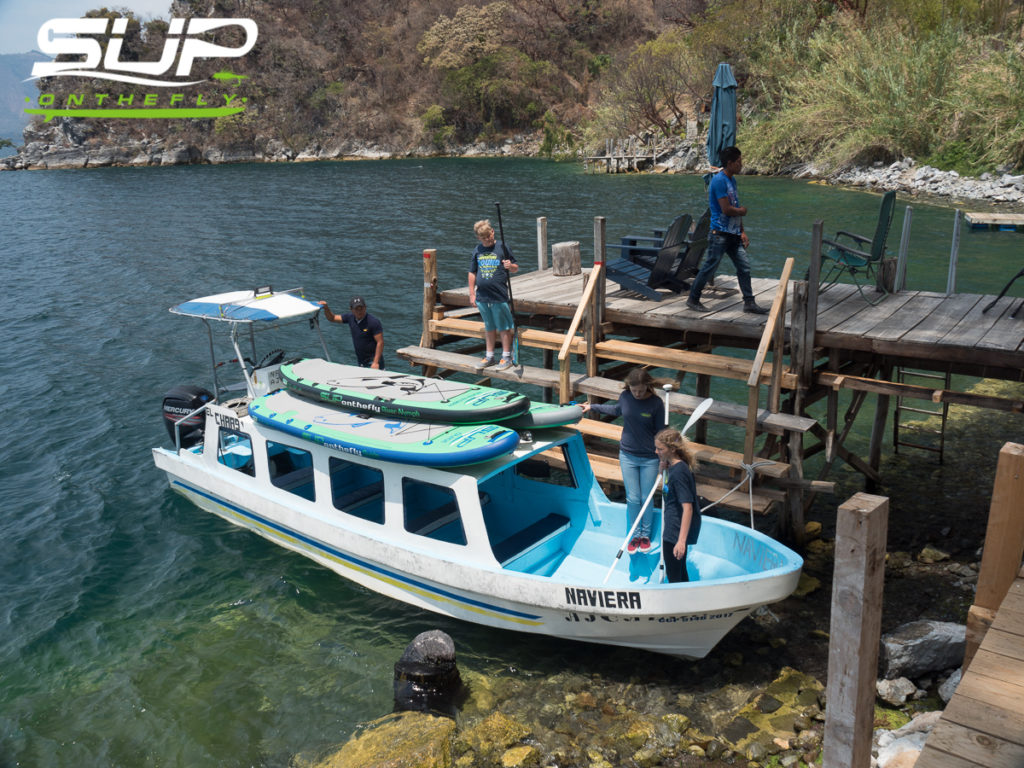 SUP onthefly Boards on a Launcha

Each community on Lake Atitlan has something unique to offer. There are many spectacular private homes that are only accessible by water. Public boats, called “launchas” come by all day at approximately 20 minute intervals, however the word “approximately” is important! This isn’t the same as a bus or train schedule. At times, we waited 40 minutes for a boat, but we were usually picked up within 10 minutes. It is very important to note that boats stop running at 6:00pm. Every community on the lake can be reached by a 45 minute boat ride that costs 20 quetzals. (about $2.50 USD). This is the tourist price. Similar to many 3rd world countries, locals pay much less. Rather than fight it, accept it as you role as a guest in a place where people earn a small fraction of your income. 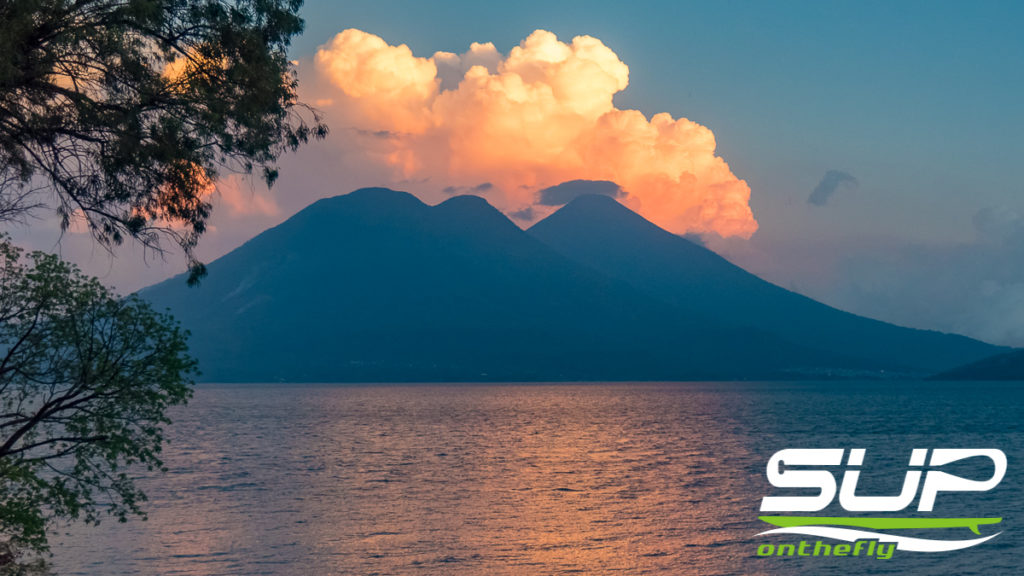 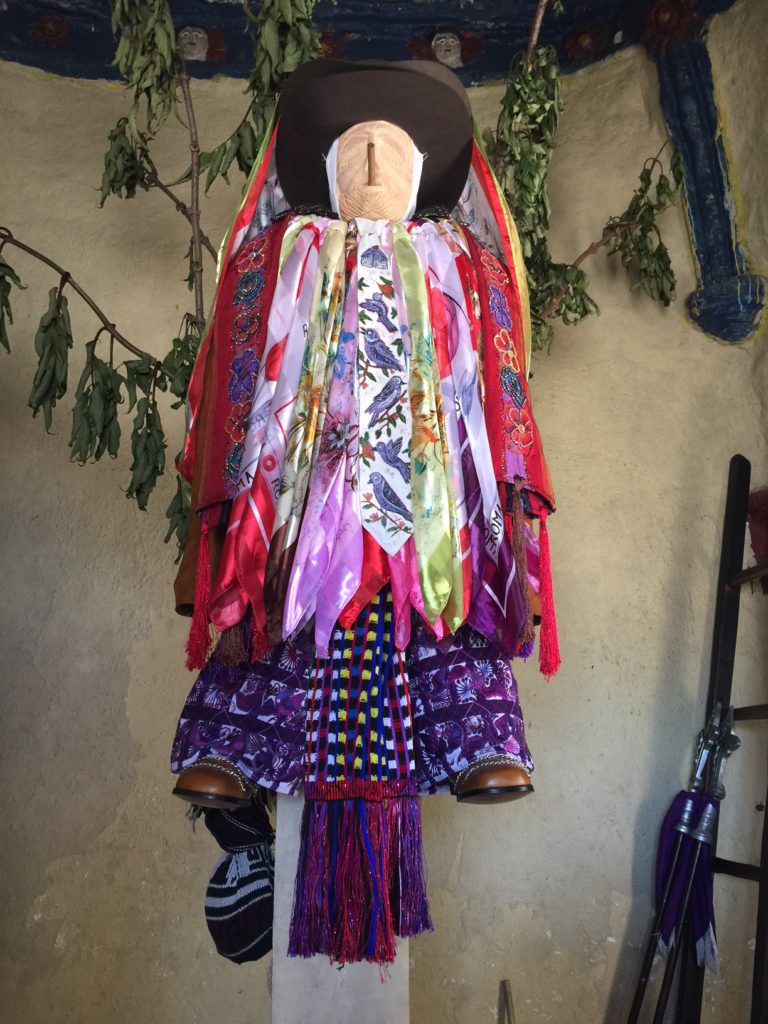 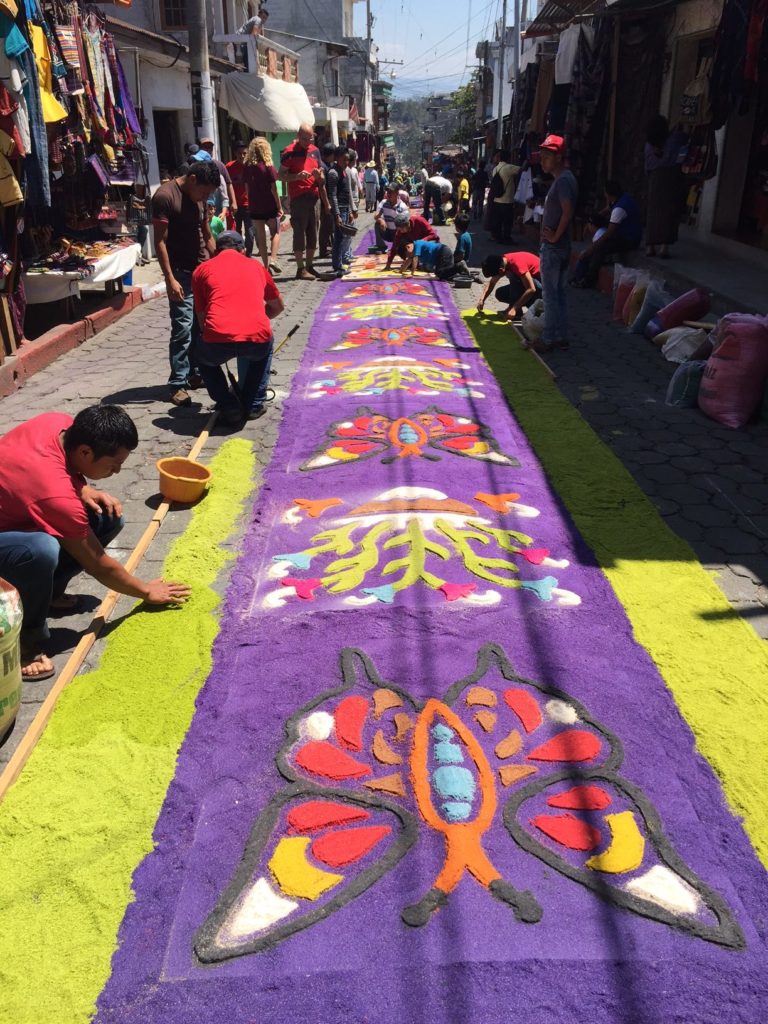 This community offers a fascinating example of paganism and Catholicism living side-by-side. The center of Mayan Religion, the god Maximón, is a statue that travels from house to house in Santiago Atitlan. Visitors are allowed to see Maximón, but are expected to bring a gift of cigarettes, liquor or candles. Santiago Atitlan has fascinating traditions during Semana Santa (Holy Week) as described in this article in Revue Magazine.

We visited Santiago Atitlan on Good Friday (before Easter Sunday). A diminutive elderly man in traditional Mayan clothing met us as we stepped off the boat and asked if we would like to meet Maximon. He took us through sidewalks crowded with activity for the upcoming culmination of Holy Week. Streets were being decorated with “alfombras” (carpets) of spectacular images made with brightly colored sand. Several city blocks were dedicated to these carpets, which would become a parade route.

After ascending the streets of Santiago Atitlan, we were led to a large square in front of the town’s large Catholic church. Maximon was being housed in a small building at the side of the square. Contrary to what we had originally read about the Mayan communities, the indigenous practice of religion is not a blend of Catholicism and Mayan Religion. They are two separate entities. An indigenous person may be Catholic or practice Mayan Religion, but not both. However, there is a high degree of respect and tolerance among the two religions. For instance, a family may have members who practice either religion and each is seen as having merit. 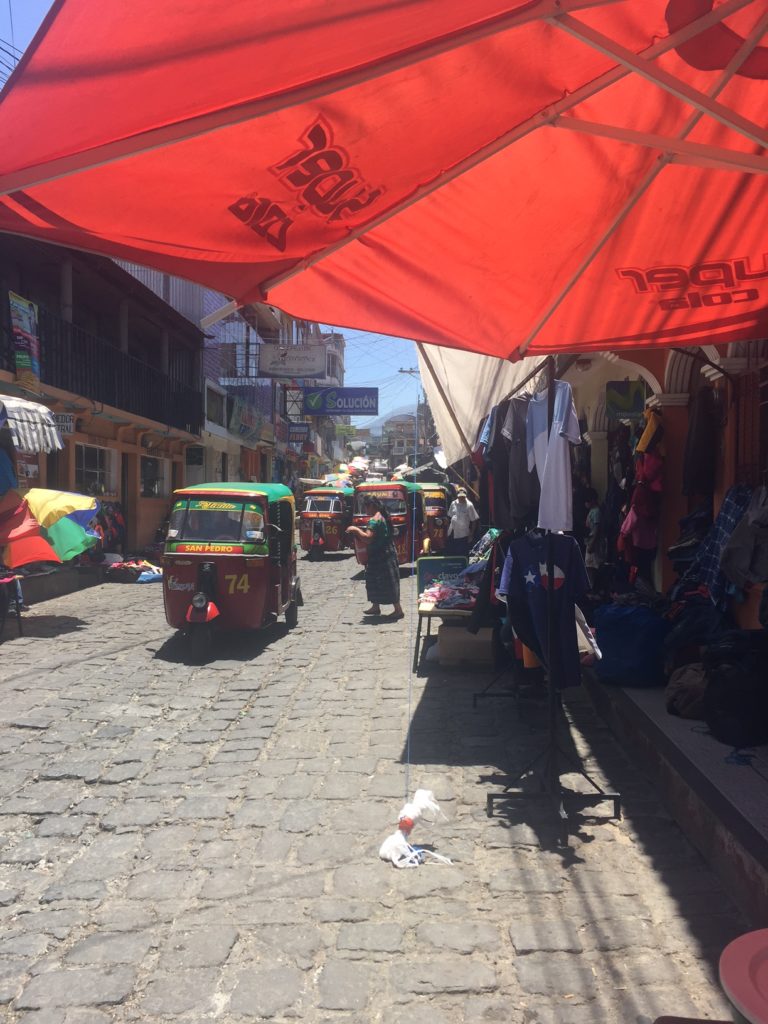 Tuk-Tuks at the Market In San Pedro La Laguna 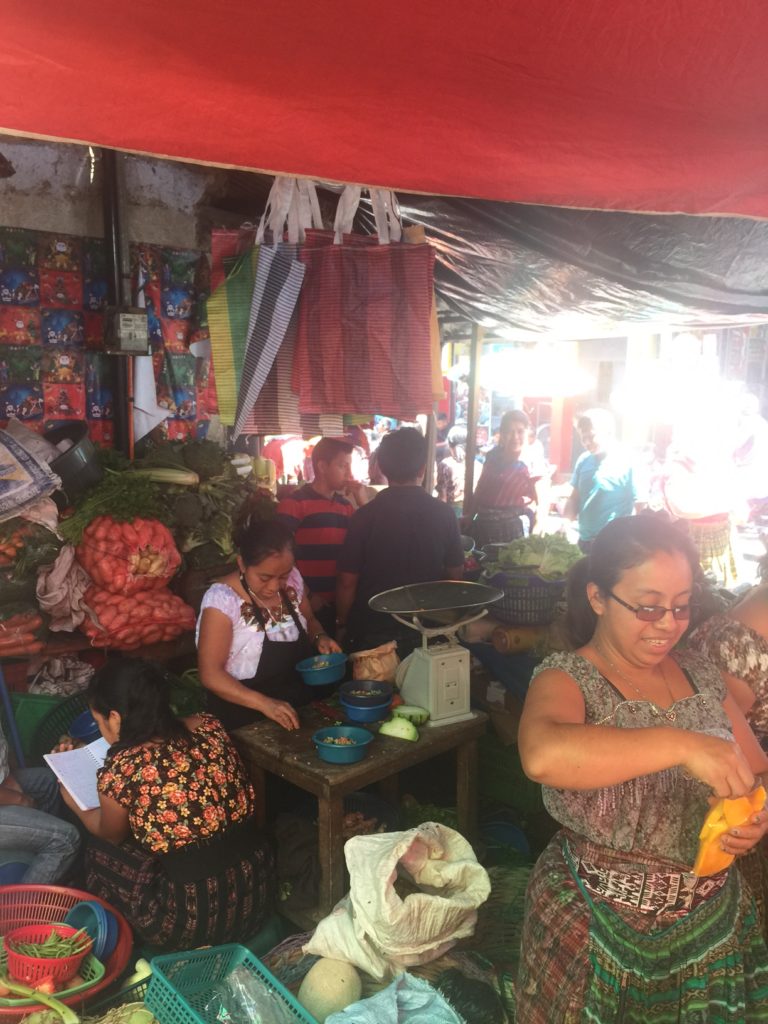 San Pedro La Laguna has the reputation of having an active night life. For this reason, it has numerous hostels that attract young international backpackers. We visited San Pedro La Laguna on a Friday, which was a market day. Many locals visit this market to get fresh chicken, pork and fish since it is difficult to find meat in the other communities around the lake. We also loved the jewlery at shops in San Pedro La Laguna.

San Pedro La Laguna sits at the base of the San Pedro volcano. Though we didn’t get the chance to hike the volcano, we were told that the trip takes approximately 3 hours with a guide. You can also hire horses and ride up the volcano on horseback. Views from the top are entirely spectacular and well with the trip.

Like many other locations around Lake Atitlan, San Juan La Laguna offers impossibly beautiful scenery! It is a delightful community that is home to a large coffee growers collective and a weaver’s cooperative. In San Juan La Laguna, be sure to visit the Cafe San Juan coffee shop to learn about coffee growing and production in this region. You can also take a four hour course in weaving from indigenous Mayan women in the weaving cooperative. 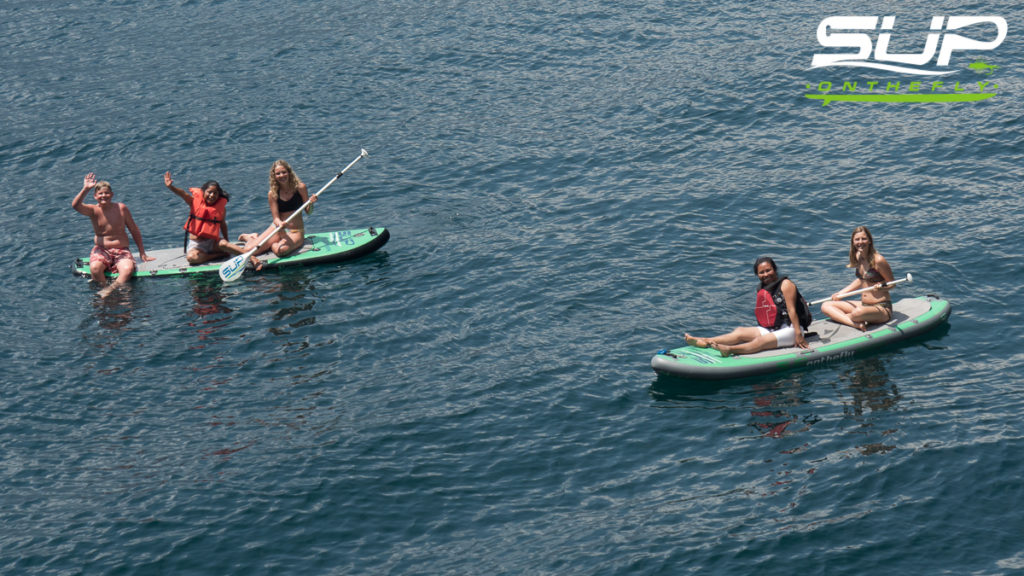 Kids with Their EcoSpanish School Teachers 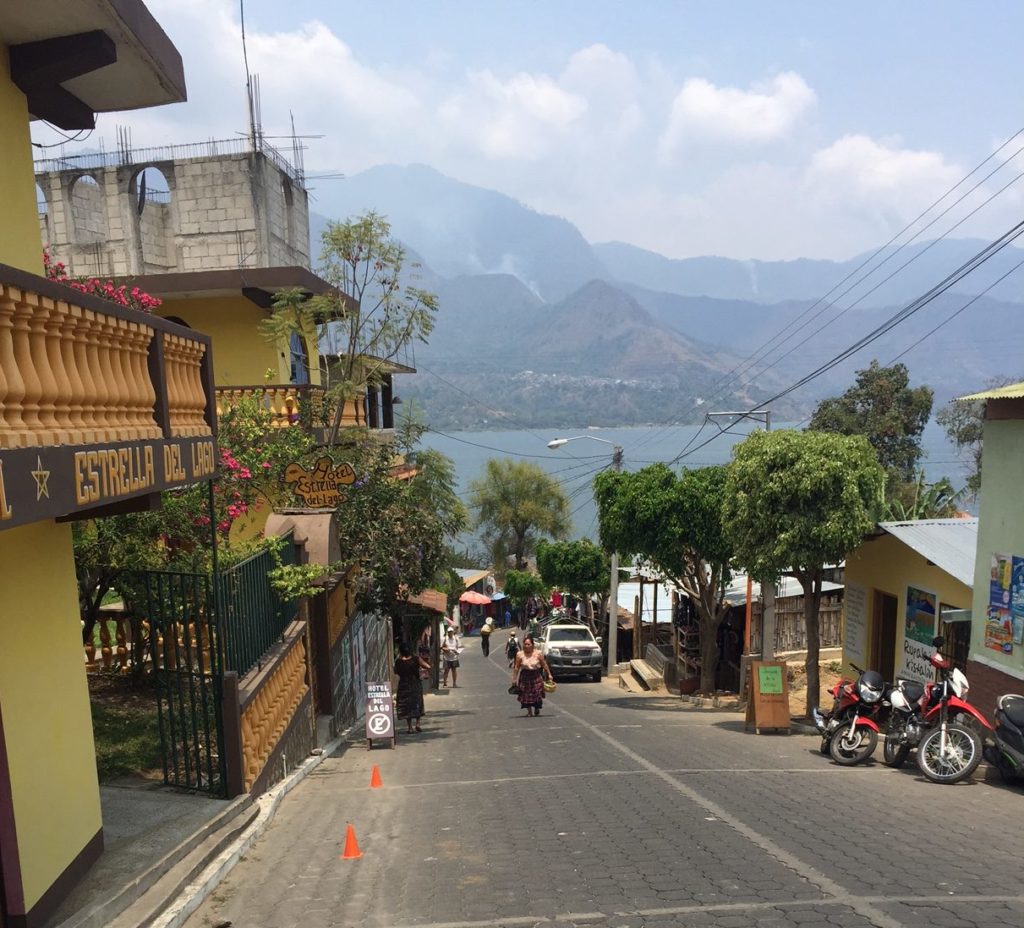 If you are interested in learning Spanish, San Juan La Laguna is home to the EcoSpanish School. Our children took classes 3 hours a day for 5 days. Schedules are flexible. The teachers took the kids shopping, went out for ice cream, and even came to our home on the other side of the lake. Rather than focus on grammar, we opted for a conversational “survival” Spanish language experience. The instructors did not speak English. In fact, their native language was not Spanish, but one of the seven indigenous languages that are spoken on Lake Atitlan. On the last day of Spanish classes, we invited the instructors to swim and play on the inflatable SUP onthefly paddle boards we brought from the U.S. Like most Mayans living on Lake Atitlan, our friends didn’t know how to swim. This is true for fishermen as well, which is truly astounding considering the unpredictable nature of wind and waves on the lake! 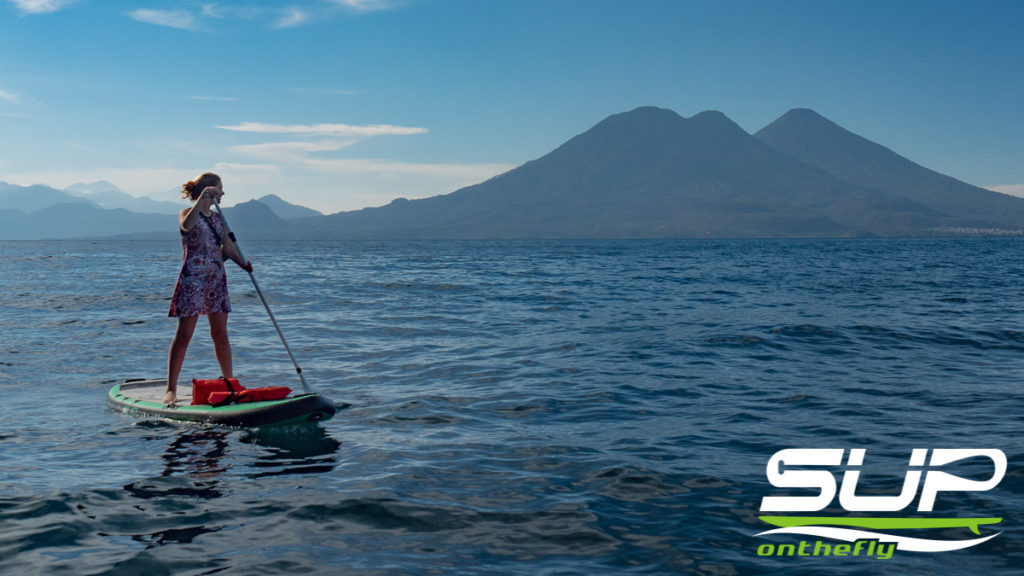 Our home on Lake Atitlan was in a little bay just to the east of San Marcos La Laguna. For our location, inflatable SUP’s were priceless. Due to precipitous embankments along the lakeshore, our home was virtually inaccessible by land. The SUPs provided a way to access great cliff-jumping spots, enjoy leisurely paddles to breakfast in San Marcos La Laguna, and go anywhere after the launchas stopped running at 6:00!

We loved staying near San Marcos La Laguna. In addition to a beautiful indigenous community, San Marcos is home to hippies, eco-tourists, a handful of yoga retreat centers, and metaphysical practitioners for virtually any mode of alternative spiritual or physical healing. Drumming, chanting, ecstatic dancing, and extended periods of silent meditation are the norm in San Marcos. 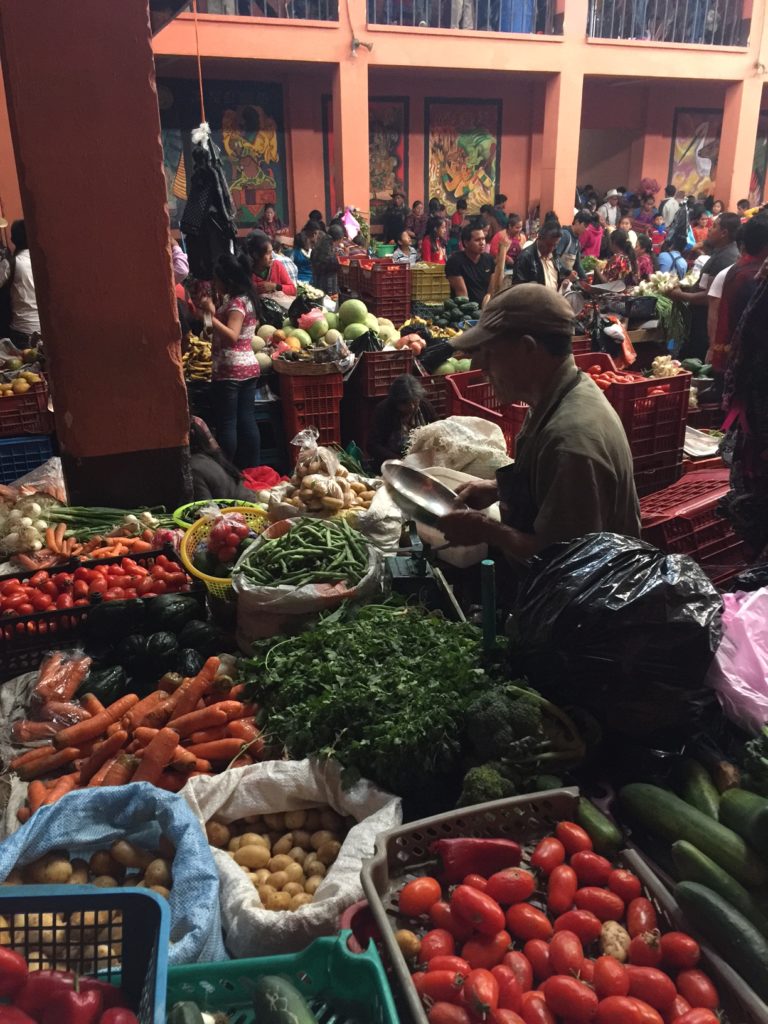 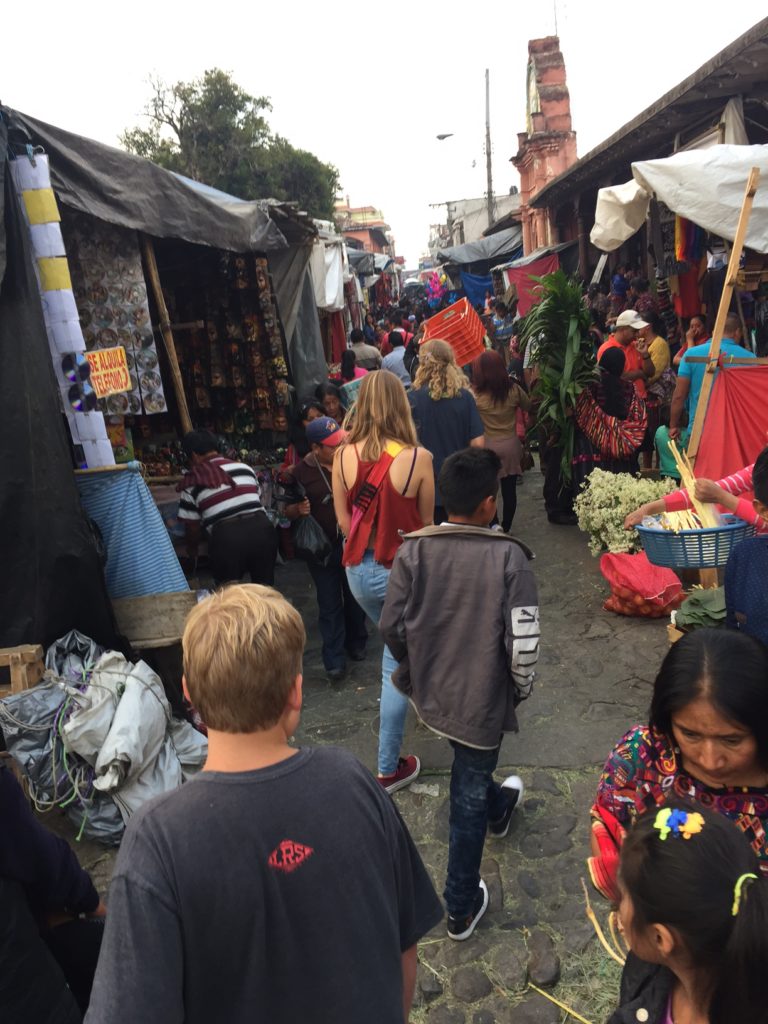 If you come to Lake Atitlan, don’t miss the Chichicastenango (Chichi) market, which is the largest market in Central America! Market days are Thursdays and Sundays. The market is a couple hours from Pana by chicken bus if you catch the express. Indigenous Mayan women wearing colorful huipils carry their wares in baskets on their heads. We found it comical to see women carrying backpacks on their heads instead of their backs!

Though many people claim that you get better bargains at the Chichi market, we found prices to be similar to the towns around Lake Atitlan. As a rule, you can plan to spend 1/2 of a vendor’s starting price.

People often ask how we manage to navigate on boats, buses, and planes with a family of five. There are a few key items that made our travels run more smoothly. First, we had our Osprey luggage. As owners of an outdoor store, we have access to pretty much any backpack or luggage in the industry. Having dealt with our share of blown zippers and broken wheels from other luggage brands, we really appreciate the reliability of our Osprey luggage, which takes serious abuse. 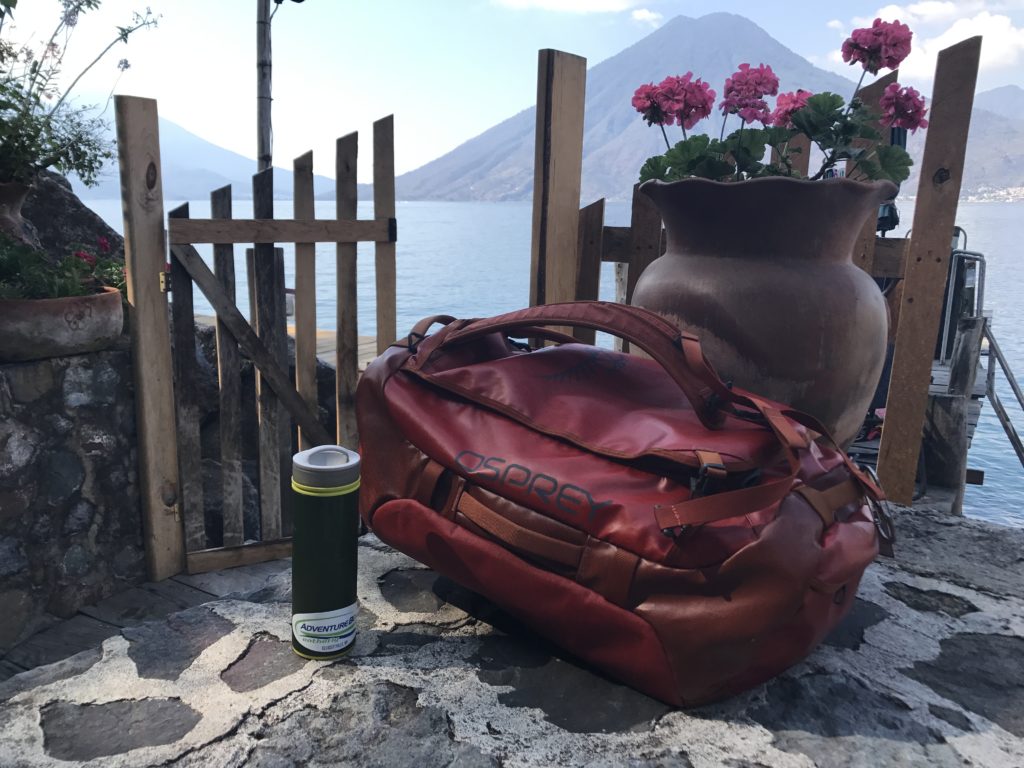 We were also REALLY glad to have Grayl water filters. They look like a water bottle, but have a filter that delivers unparalleled safety. I used to be the product manager for a water filtration company. The Grayl filters are much easier to use than traditional camping filters. Grayl filters were critical at our hostel in Antigua. Also… our flight out of Guatemala City left at 1:30am. Of course everyone had to relinquish plastic water bottles at airport security. Shops on the other side of security had closed hours earlier. Over 300 thirsty passengers waited for flights with no option for drinking water. We were so glad to have our Grayl bottles!

But by far the most valuable items we brought on our trip to Lake Atitlan were our SUP onthefly inflatable stand up paddle boards. In honesty, I would never travel to the lake without a SUP. In addition to providing enjoyment and transportation, we readily found buyers for all three boards.

We brought a SUP onthefly Guide, SUP onthefly Streamer and SUP onthefly River Nymph, which were critical for  transport when the launchas stopped running at 6:00pm, when launches were full and wouldn’t pick us up, or when we just wanted a quick, enjoyable trip to town. Mornings on the lake are almost always calm. Some of our favorite moments from the entire trip were the morning paddles to breakfast, when the lake was the calmest.

Though our trip to Lake Atitlan is over, we are can’t wait to visit again soon! 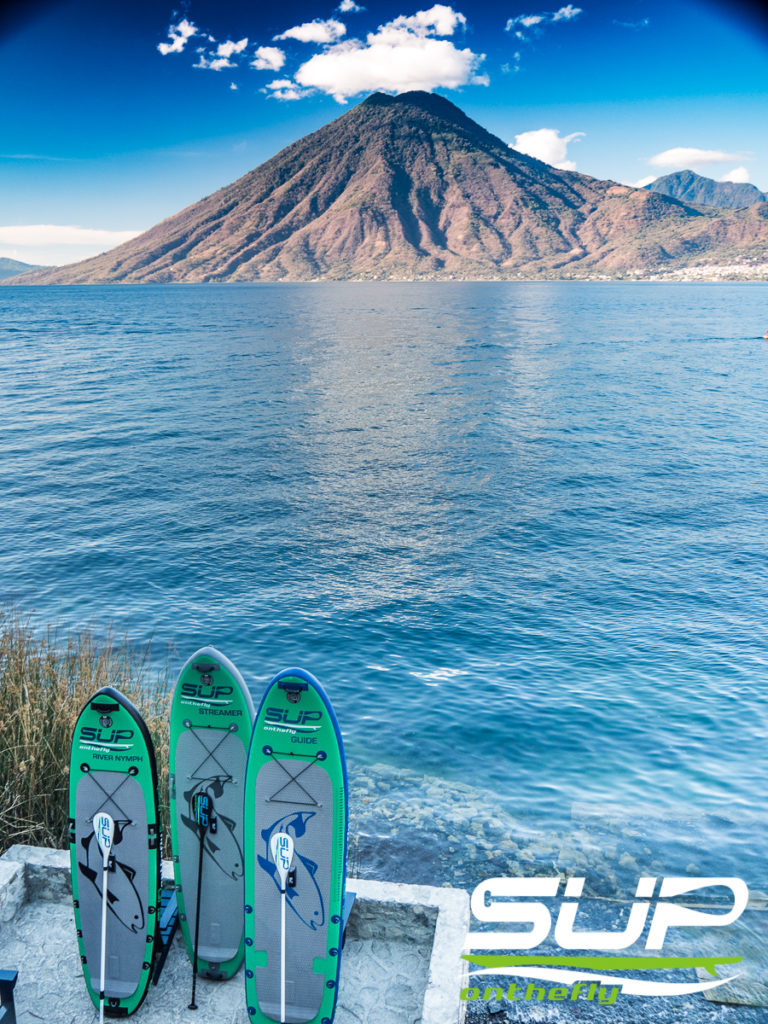